Aggregates used for asphalt mixtures could be crushed rock, sand, gravel or slags. Nowadays, certain waste and by-products, such as construction and demolition debris, are being used as aggregates, which increases the sustainability of asphalt.

In order to bind the aggregates into a cohesive mixture a binder is used. Most commonly, bitumen is used as a binder, although nowadays, a series of bio-based binders are also under development with the aim of minimising the environmental impact of the roads.

An average asphalt pavement consists of the road structure above the formation level which includes unbound and bituminous-bound materials. This gives the pavement the ability to distribute the loads of the traffic before it arrives at the formation level. Normally, pavements are made of different layers:

How is asphalt produced? 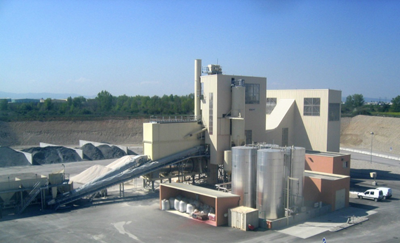 To be able to provide the best performance to different applications, a large variety of asphalt mixes can be used. Due to the different requirements (amount of traffic, amount of heavy vehicles, temperature, weather conditions, noise reduction requirements, etc.) the respective mix used needs to have an sufficient stiffness and resistance to deformation in order to cope with the applied pressure from vehicle wheels on the one hand, yet on the other hand, they need to have an adequate flexural strength to resist cracking caused by the varying pressures exerted on them. Moreover, good workability during application is essential in order to ensure that they can be fully compacted to achieve optimum durability.

Asphalt mixtures can be produced at different temperatures

A typical WMA is produced at a temperature around 20 – 40 °C lower than an equivalent Hot Mix Asphalt. Significantly less energy is involved and, consequently, less fumes are produced (as rule of thumb, a reduction of 25ºC produces a reduction of 75% of fumes emission). In addition, during the paving operations, the temperature of the material is lower, resulting in improved working conditions for the crew and an earlier opening of the road.

Cold mixes are produced without heating the aggregate. This is only possible, due to the use of bitumen emulsified in water, which breaks either during compaction or during mixing. Producing the coating of the aggregate. Over the curing time, water evaporates and strength increases. Cold mixes are particularly recommendable for lightly trafficked roads. 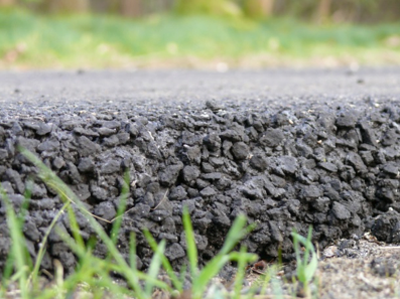 In general the asphalt layers are paved on a bound or unbound road base layer. Starting at the road surface, the first layer is called the surface course. The second layer is mostly called the binder course. The lower layers are the base courses.

The surface course constitutes the top layer of the pavement and should be able to withstand high traffic- and environmentally-induced stresses without exhibiting unsatisfactory cracking and rutting. Its main mission is to provide an even profile for the comfort of the user, while providing enough texture to ensure minimum and safe skid resistance. Depending on local conditions, functional characteristics such as skid resistance, noise reduction and durability are often required for wearing courses. In some cases, rapid drainage of surface water is desired while in other cases, the wearing course should be impermeable in order to keep water out of the pavement structure. A wide range of surface layer products can be used depending on specific requirements. Surface layers types are: 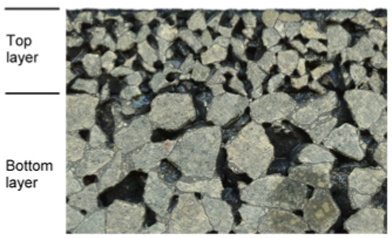 Binder courses are designed to withstand the highest shear stresses that occur about 50 – 70 mm below the asphalt surface. The binder course is therefore placed between the surface course and base course to reduce rutting by combining qualities of stability and durability. Stability can be achieved by sufficient stone-on-stone contact and stiff and/or modified binders.

The base course is perhaps the most important structural layer of the pavement, which is intended to effectively distribute traffic and environmental loading in such a way that underlying unbound layers are not exposed to excessive stresses and strains. This often implies comparatively high stiffness of the base course. Next to this the base course should also show adequate fatigue resistance.

Since the formation and sub-soil often constitute relatively weak materials, it is of utmost importance that the damaging loadings are effectively eliminated by the layers above. In this case, unbound road-base or sub-base layers consisting of uncrushed or crushed aggregate can be suitable.

…asphalt is sometimes referred to as a flexible pavement. This is due to its ability to largely resist the stress imposed by slight settlements of the subgrade without cracking.

…asphalt is the predominant material used for road construction and maintaining the road network in Europe?

…25% of the total world asphalt production takes place in Europe?

…the average amount of bitumen used in asphalt is 5% by weight?

… some people still talk about tarmac of tarring a road. Since the 1990’s tar is not used anymore in road building.
… tar is totally different from bitumen. They are both black, but tar comes from coal and bitumen from heavy crude oil.

…Europe has over 2.500 asphalt production sides and over 9.500 companies are involved in the asphalt production and  / or laying?… some people still talk about tarmac of tarring a road. Since the 1990’s tar is not used anymore in road building.

… tar is totally different from bitumen. They are both black, but tar comes from coal and bitumen from heavy crude oil.

Did you know that.. 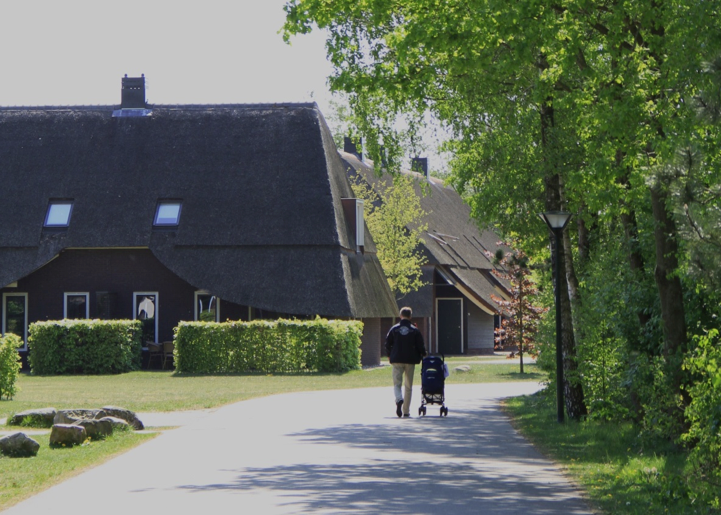 More info can be found in: