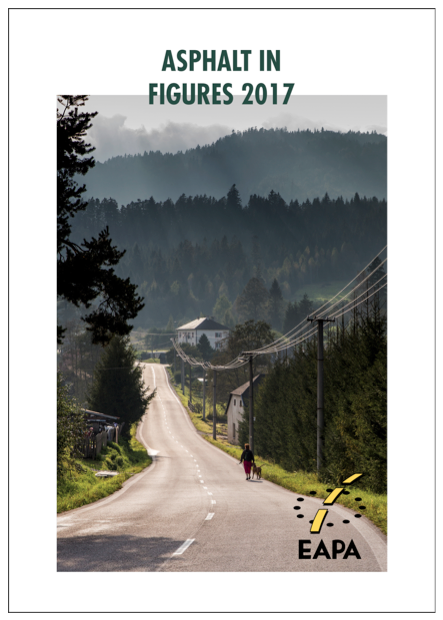 Every year EAPA is collecting and publishing key figures of the European asphalt industry in the so called “Asphalt in figures”. In these overviews you can find data of the asphalt production in Europe, data regarding the application and the use of binders. The data have been established with the assistance of the members of EAPA (the European Asphalt Pavement Association).

Hot mix asphalt is a material composed by aggregates and bitumen, which are normally mixed at a temperature around 160ºC-180ºC. By using special techniques and/or additives, it is possible to reduce the production temperature to 100ºC – 150°C, which is called Warm Mix Asphalt (WMA). When the aggregates are heated but bitumen emulsion (containing water) is used instead of bitumen, it is possible to reach production temperatures of 50ºC – 100ºC (Half Warm Mix). Finally, Cold Bituminous Mixtures (CBM) can be obtained by using bitumen emulsion and aggregates at ambient temperature.

Over the period 2008-2017, a reduced number of countries, such as Denmark and Norway (Figure 1-a) showed a general increasing trend. However, most of the countries (in Figure 1-b examples of Germany, Italy and Spain) experienced significant reductions between the first years (2008 – 2013), which match the worst years of the European economic crisis. After such period, their production tended to stabilise around a fixed value or even experience slight increases.

In Table 2 it can be seen the annual variation of asphalt production registered in the different countries over these years. The last three columns show the average of these variations in three periods: (1) initial crisis period between 2008 and 2013; (b) over the post-crisis recovering period of 2014 to present; and (c) over the total case-study time 2008 to 2017. As it can be seen, during the economic crisis, 20 out of the 29 countries, showed decreases in their production. Nevertheless, after 2014, only a very reduced number of countries (e.g. Croatia and The Netherlands) kept a decreasing trend, which indicates that, in general, the sector is recovering.

In this sense, it can be observed that the production of EU-28 countries passed from an average annual grow of -5.8% (decrease) to +1.6% (increase), while the whole Europe (including e.g. Norway, Switzerland and Turkey) passed from -3.7% to +1.8%.

It is especially remarkable that some countries have registered very significant increases in their productions over the last period 2014-2017. Hence, countries such as Czech Republic, Estonia, Iceland, Slovakia and Slovenia registered an average increase close or even greater than 10% per year.

Nevertheless, the sector is, in general terms, not completely recovered. Only 12, out of 33 studied countries have registered in 2017 greater production than in 2008 and only 13 obtained a positive average increase over this period (which means that in the rest of the countries the annual decreases were more prominent than the annual increases). In terms of total production, European countries have increased their figures over the last period, but the 296.7 Mt registered in 2017 are closer to the figures of 2002 (298.0 Mt) than to the maximum of 2007 (347.7 Mt). 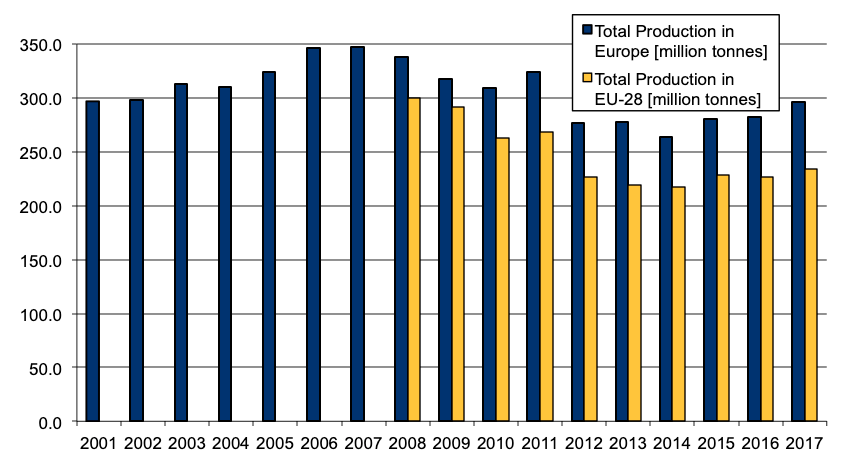 Table 3 shows the main applications in which asphalt was used (data only available in Austria, Belgium, Croatia, Czech Republic, Denmark, Estonia, Finland, Germany, Hungary, Italy, Luxembourg, Netherlands, Norway, Slovakia, Slovenia, Spain and Turkey). In these countries, an average of 58% of hot and warm mix asphalt was produced for surface courses, 21% for binder courses and 21% for base courses. Hence, road maintenance and the replacement of the top layers of the European roads was the main task in 2017 for the European Asphalt Industry. Almost 80% of the asphalt was produced on average for the two top layers of the road structure. 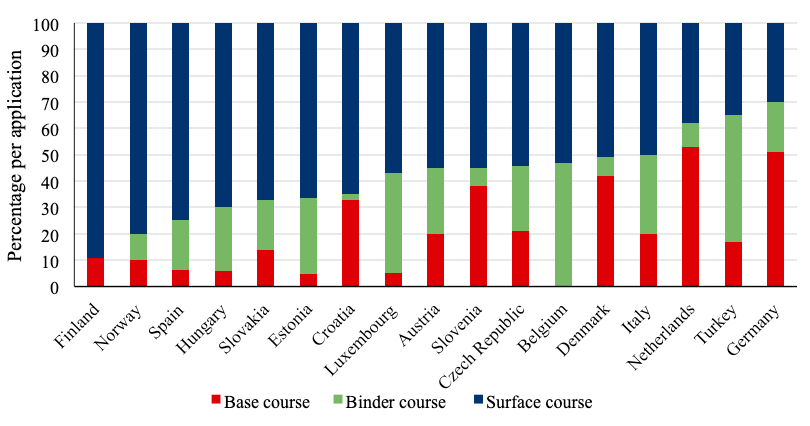 Figure 3 shows the percentage of asphalt mixtures implemented in each application and in each country. As it can be seen, only in The Netherlands, Turkey and Germany, the amount of asphalt applied in course layers (38%, 35% and 30%) was a minority compared to binder and base layers. The especial cases of The Netherlands and Germany, where the base and the sum of top layers was balanced around 50%-50%, might indicate that in these countries the construction of new pavements and/or the full in-depth rehabilitation of old pavements were the most predominant operations, instead of surface treatment, more common in the rest of countries.

Productions of different types of asphalt mixes, depending on the production temperature, can be found in Tables 5 to 8. Figure 4 (left) shows the sum of annual productions of WMA in those countries with complete data series available for the period 2012-2017. These countries are: Austria, Croatia, Czech Republic, Denmark, Estonia, Finland, France, UK, Hungary, Luxemburg, Netherlands, Norway, Slovakia, Slovenia, Spain and Sweden. As it can be observed, the production of WMA has been steadily increasing at an approximate rate of 0.4 Mt per year and the value of 2017 (7.76 Mt) is 35% higher than the value of 2013 (5.75 Mt). This increase is significantly higher than the 7% registered in the total asphalt production between 2013 (277.3 Mt) and 2017 (296.7 Mt). This means that, although the use of WMA is still far from the use of conventional HMA, the technology is clearly penetrating the market and has potential to keep growing over the coming years as a substitute of HMA. 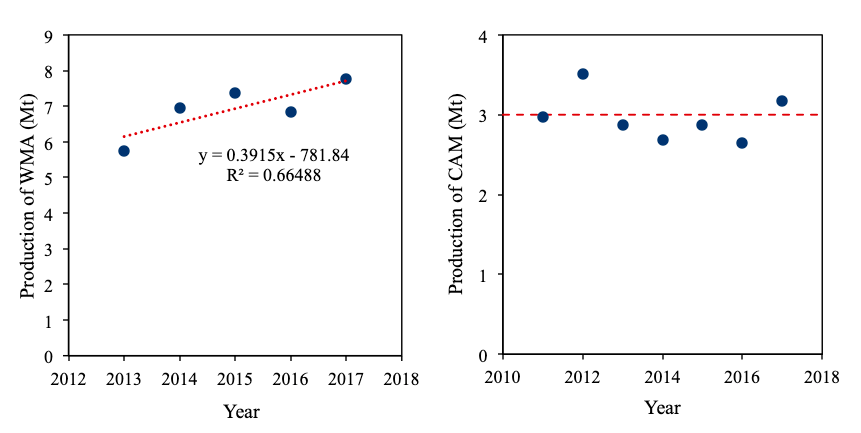 For the case of CBM, the available data belonged to the countries: Belgium, Czech Republic, France, Hungary, Slovakia, Spain, Sweden and Turkey. As it can be seen in Figure 4 (right) the production of CBM has experienced significant fluctuations, around the value of 3 Mt per year. These fluctuations, similar to the trend of the general production, might indicate that the market of CBM has reached a mature state where there has not been a significant number of new applications with potential enough to increase the production.

Table 10 shows the reclaimed asphalt available in the following countries: Austria, Belgium, Czech Republic, Denmark, Finland, France, Germany, Great Britain, Hungary, Italy, Netherlands, Norway, Slovakia, Slovenia, Spain and Turkey. The total amount available in these countries was 47.3 Mt. The leading countries are Germany with 13 Mt (27% of total), Italy with 9 Mt (19%), France with 6.4 Mt (14%) and The Netherlands with 4.5 Mt (10%). The rest of the countries together represent only 30% of the total (Figure 6).

In average terms, 68% is reused in the manufacture of new mixes (especially HMA and WMA). 19% is recycled as granular material in unbound road layers, 1.25% is used in other applications of civil engineering and the remaining 11% is put to landfill.

Nevertheless, some exceptions were found, such as Norway and Turkey, where 69% and 85% respectively are used in unbound road layers, or Slovenia, where 60% is put to landfill or used in other applications not proper of Civil Engineering. 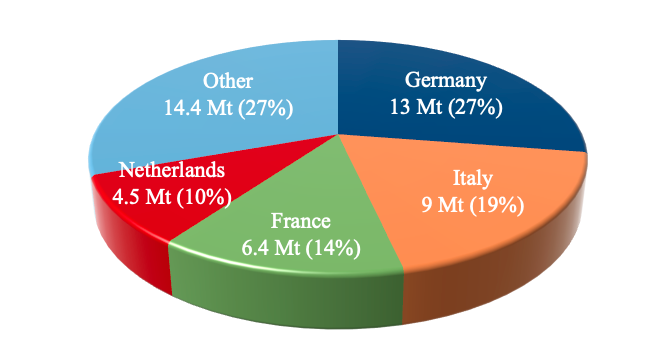