On 3rd March 2015 Egbert Beuving and Carsten Karcher of EAPA had a meeting with the Member of European Parliament (MEP) Dr. Dieter-L. Koch, Vice-chair of the Committee on Transport and Tourism (TRAN) in Brussels.

The goal of this meeting was to inform MEP Koch about EAPA and to create opportunities for future cooperation and future discussions as well as getting the latest information of planned legislation processes concerning European infrastructure and transport. 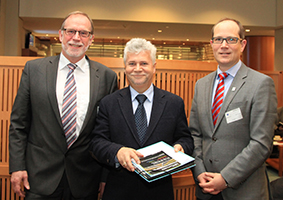 Koch was informed about the EAPA work and the goals of EAPA. The latest developments in the asphalt industry were explained: Warm Mix Asphalt to reduce energy, etc. and the 100% re-usability of asphalt. It was also mentioned that EAPA is informing the general public about asphalt and the role of asphalt roads in their daily life. Also the AsphaltAdvantages campaign was explained.

With link to ERF-Road Asset Management event, which Koch and EAPA both attended last month, the consequences of lack of financing for road maintenance, which will create a much bigger problem for next generation, was discussed.

Investing money in European road infrastructure will stimulate employment. Because Europe wants to create new jobs and has to stop unemployment of young European citizens, investing in road maintenance would create these new jobs especially for young people.

Possible future legislation and harmonisation was discussed as well a safety and noise.

Koch mentioned that the European Commission will evaluate all existing regulations and will create a new legislation package for transport in 2016. The details are not known yet. EAPA was invited to put forward its ideas and to influence this package. Also the idea of a European Road (Safety) Agency was discussed as well as the possibility for Koch to give a presentation at the E&E Congress 2016 in Prague, where he could present the EP’s view on roads and what is going on in Brussels regarding road infrastructure.